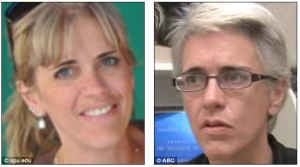 For 15 years, Heather Ann Clement was a faculty member at Azusa Pacific University, an evangelical Christian school in Southern California.

But that changed last month, with the start of Azusa’s new academic year, when Heather came out as a transgender. The professor of theology began referring to herself as Heath Adam Ackley. And she even started to develop a more masculine appearance.

The professor of theology formerly known as Heather demanded that Azusa officially recognize “his” new name and gender change. So university administrators sat the prof down for several “thoughtful conversations.”

After hearing out Heather/Heath, it was abundantly clear to Azusa administrators that the evangelical Christian university’s long established “views on the theology of sexuality” were decidedly different from those of the transgender faculty member.

So they decided “it would be best for Dr. Ackley to pursue professional endeavors elsewhere.” And, by “mutual agreement,” he resigned this past Friday.

But not without becoming the latest cause célèbre among crusaders for LGBT “rights.” Indeed, said Ackley, he has garnered an “overwhelming amount of support” from his former students at Azusa, from fellow university professors, and from sympathizers on social media.

“We stand in solidarity with Adam,” declares an online petition, posted by Alyson Thatcher, an Azusa student.

She and her likeminded classmates, “strive to create a safer environment for students and faculty who have been marginalized by APU’s conservative policies, as well as those who have been victims of spiritual violence on campus.”

But what, pray tell, did young Miss Thatcher expect when she enrolled at Azusa?

That the Christian evangelical university would be no different than your typical Godless, socially-liberal institution of supposed higher learning?

That LGBT profs like Heather/Heath would be welcomed on Azusa’s God-fearing, socially conservative faculty? That students would spend their four years on campus partying like the last days of Sodom and Gomorrah?

And, as to the newly unemployed professor of theology formerly known as Heather, she/he obviously was deluded in thinking she/he could “reinvent” herself as a man, and her/his abomination before God wouldn’t get her/him kicked off the Azunsa faculty.

The transgender didn’t violate any of the university’s policies, her/his attorney, Paul Southwick, told NBC4 in Los Angeles. “The only code they have is homosexual conduct,” Southwick argued, “but Adam hasn’t (engaged) in homosexual conduct.”

His client is just a man trapped in a woman’s body.

Well, Heather/Heath’s gender-identity issues may not be a problem at secular universities – in fact, it probably would be celebrated as example of the university’s commitment to “diversity” in even its most perverse manifestations.

But no truly Christian institution would knowingly and willingly subject its young and impressionable students to an unabashed, unrepentant transgender professor.

Are Asunza administrators “homophobes” or “bigots” or “haters,” as they’ve been accused by supporters of Heather/Heath? Absolutely not.

They have responded with grace to the former prof’s gender confusion. “We appreciate Dr. Ackley’s past service,” read a statement from the university president, “and pray God’s best for the journey ahead.”

06 Oct This entry was published on October 6, 2013 at 1:44 PM. It’s filed under HOMOSEXUALITY and tagged AZUSA PACIFIC UNIVERSITY, H. ADAM ACKLEY, HEATHER ANN CLEMENT, TRANSGENDER. Bookmark the permalink. Follow any comments here with the RSS feed for this post.

17 thoughts on “Transgender Right to Teach at Christian University?”