Are Most ‘Preachers’ Daughters’ Hot-to-Trot Lolitas? 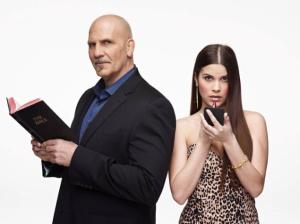 So I was looking over the wife’s shoulder while she was watching “Project Runway” on Lifetime TV. During a commercial break, Lifetime aired a promo for a new show that debuts tonight.

The promo begins with the familiar Aretha Franklin tune, “I Say a Little Prayer,” playing in the background.

A young woman, looking like she works for some sort of escort service, is getting dressed. She oh-so-sexily applies her lipstick and mascara before teasingly stroking her hair.

She surveys a rack of clothes before deciding upon a dress that looks very much like lingerie. She puts on a pair of suede high heeled pumps then walks down a flight of stairs (in slow motion, of course).

I thought the promo was for some spin-off of “The Client List,” the Lifetime series starring Jennifer Love Hewitt as a lovable housewife-next-door turned high-priced escort.

But, in fact, it was for a new Lifetime reality show – “Preachers’ Daughters” – that most Christians, I suspect, will find offensive. Not the least because it promises viewers that the series will “raise some hell.”

“Preachers’ Daughters” features three families, headed by pastors, with teen-age daughters. Each episode, according to Lifetime, offers “a hard-hitting but often humorous look at the lives of these pastors’ daughters as they balance the temptations every teen-ager faces with their parents’ strict expectations and code of conduct as influenced by their faith.”

Of course, the problem with putative “reality” shows is that they present a decidedly distorted picture of reality. And so it is with “Preachers’ Daughters.”

Olivia, the 18-year-old daughter of Mark Perry, pastor of Everyday Church in Oceano, California, spent her high school years partying hard, abusing drugs and alcohol. She got pregnant and, so promiscuous was she, she didn’t even know who her baby’s father was.

Then there’s Kolby, the 16-year-old daughter of Nikita Koloff, a former professional wrestler who makes the family’s home in Spring Hill, Tennessee but is now a traveling evangelist. Kolby’s mom Victoria, who is divorced from her dad Nikita, happens to be a preacher herself, hosting a faith-based radio program. Teen-aged Kolby complains that before every guy she dates, “my mom has to interrogate him.”

“God made the world in seven days,” says Lifetime’s promo for “Preachers’ Daughters.” “Moses parted the Red Sea. But if these preachers can control their teen-age daughters, it would really be a miracle.”

But that’s not the reality of most preachers’ daughters. In fact, most are well-adjusted. Most are respectful of their parents. And most take seriously their Christian walk.

I know this not only from following the activities of Christian youth, including PKs (preachers’ kids), but also from first-hand experience. Because I grew up with two God-loving, self-respecting sisters who are preachers’ daughters.

12 Mar This entry was published on March 12, 2013 at 11:39 AM. It’s filed under Popular Culture and tagged 'PREACHERS' DAUGHTERS', current-events, KOLBY KOLOFF, LIFETIME, OLIVIA PERRY, REALITY SHOW, religion, TAYLOR COLEMAN. Bookmark the permalink. Follow any comments here with the RSS feed for this post.

3 thoughts on “Are Most ‘Preachers’ Daughters’ Hot-to-Trot Lolitas?”